Is There a Minimum Wage in Canada?

The federal minimum wage is adjusted annually in April based on average increases of the Consumer Price Index (CPI) to keep pace with inflation. This applies to federally regulated private sectors accounting for around 6% of all workers in Canada.

If you want to check the minimum wage by province effective at a certain time, the Minimum Wage in Canada database provides general overview of current and forthcoming minimum wage rates for adult workers. To find exceptions for the minimum wage requirements in Canada, look for the lowest hourly rates for young workers and workers with specific occupations.

Below is the 2022 minimum wage by province map illustrating the lowest hourly rates required to be paid to employees within each province and territory. For convenience, the map was color-coded to assign provinces and territories to low, medium, or high wage ranges. Click here if you want to view the 2022 minimum wage by province table including the upcoming rate increases, or here to view the 2022 hourly rates for young workers and specific occupations. 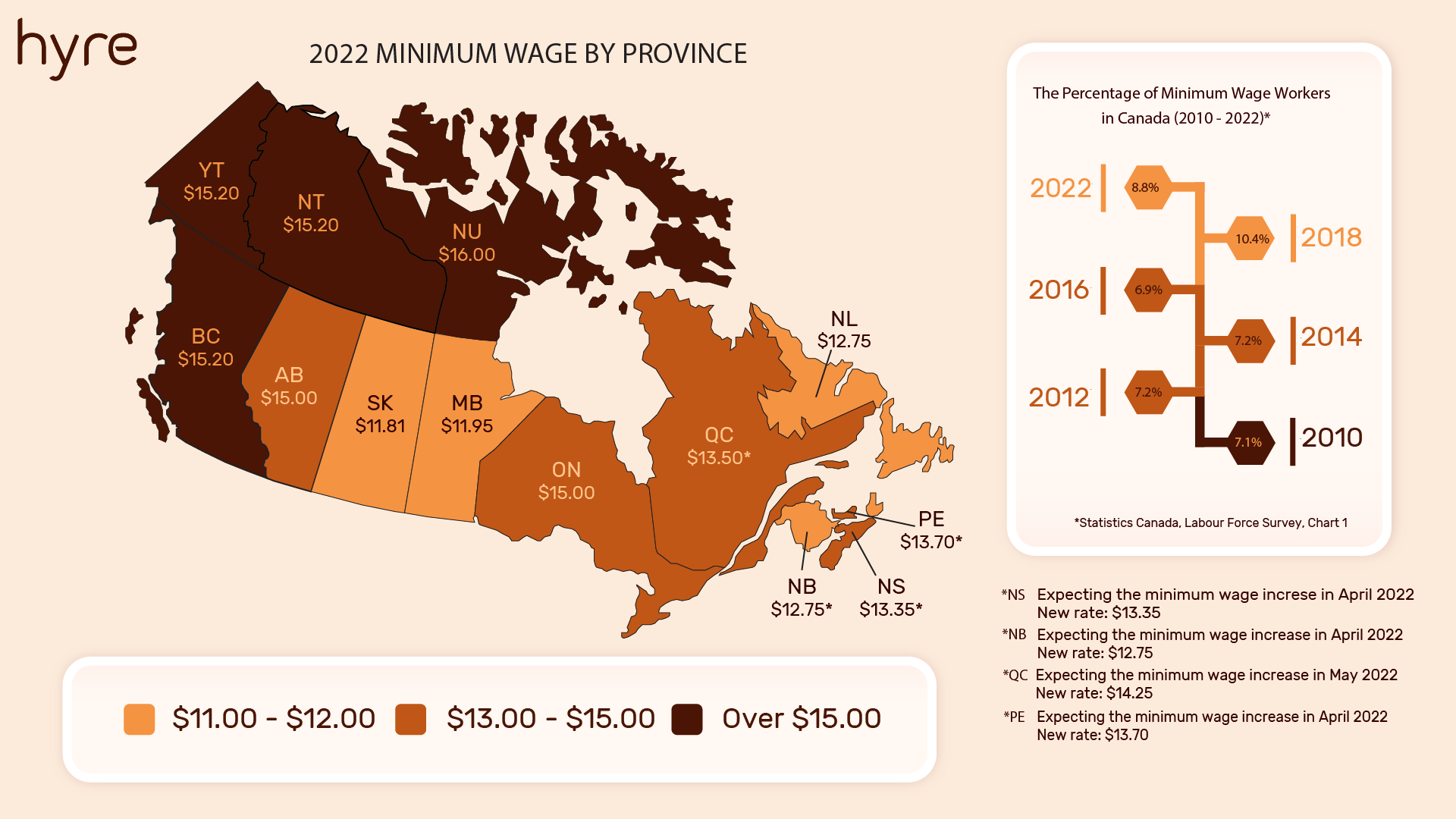 Each province and territory in Canada is responsible for the adjustments of the minimum wage rate internally. Commonly, the minimum wage rate increases annually and is subject to the Consumer Price Index (CPI) adjustments. Despite this, the increases are not mandatory. Some provinces may keep their lowest wage requirements unchanged for a few years.

Some provinces are yet to experience their first or second increase of the year. British Columbia is expecting an increase to $15.65 in June 2022. Quebec’s minimum wage is rising to $14.25 this May. Yukon is adjusting the lowest rate requirement to $15.70 per hour in August, while New Brunswick will have the second increase of the year in October raising the wage to $13.75 per hour [1].

Fill the Gaps in Your Schedule with Hyre’s Staffing Marketplace.

Ensure shift coverage at all times with our quality temp staff. A diverse talent pool, ranging from long-term care workers and cleaners to general labor and event staff, are using Hyre every day to find shift opportunities. Our comprehensive rating system and eligibility criteria will connect you with the ideal match for the job!

Data from the Labour Force Survey (LFS), a survey that collects labor-market and demographic information, are used to determine minimum wage trends [4].

Recent Stats and Interesting Facts about the Minimum Wage.

Between 1998 and 2018, the percentage of minimum wage workers grew from 5.2% to 10.4%, mostly accounted for with notable minimum wage increases in Ontario, Alberta, and British Columbia [4].
2

Over the last 20 years, the majority of employees earning minimum wage have been young workers. However, the number of core-aged and older workers is growing signifying a new trend [4].
3

A Statistics Canada study concluded that minimum wage increases contribute to shifting the composition of minimum wage employees from workers under 25 towards older workers [4].
4

Around 2018, the number of minimum wage workers increased by 60.7%. This growth coincided with significant minimum wage increases in provinces across Canada [4].
5

In recent years, discussions around the minimum wage, and its increases, have been at the centre of Canadian current affairs. This interest stems primarily from campaigns advocating for a federal wage increase to $15 per hour [4].
6

The percentage of minimum wage workers in Canada

The minimum wage rates in the table above apply to experienced adult workers under the jurisdiction of each province and territory in Canada. These wages generally apply to the majority of the population in each area. As mentioned previously, there are certain exceptions that apply to inexperienced workers, students, or workers of special occupations. Similarly to how the USA has different wage requirements for students and tipped workers. Below is the table depicting general current and upcoming minimum wage rates for young workers and specific occupations in 2022. 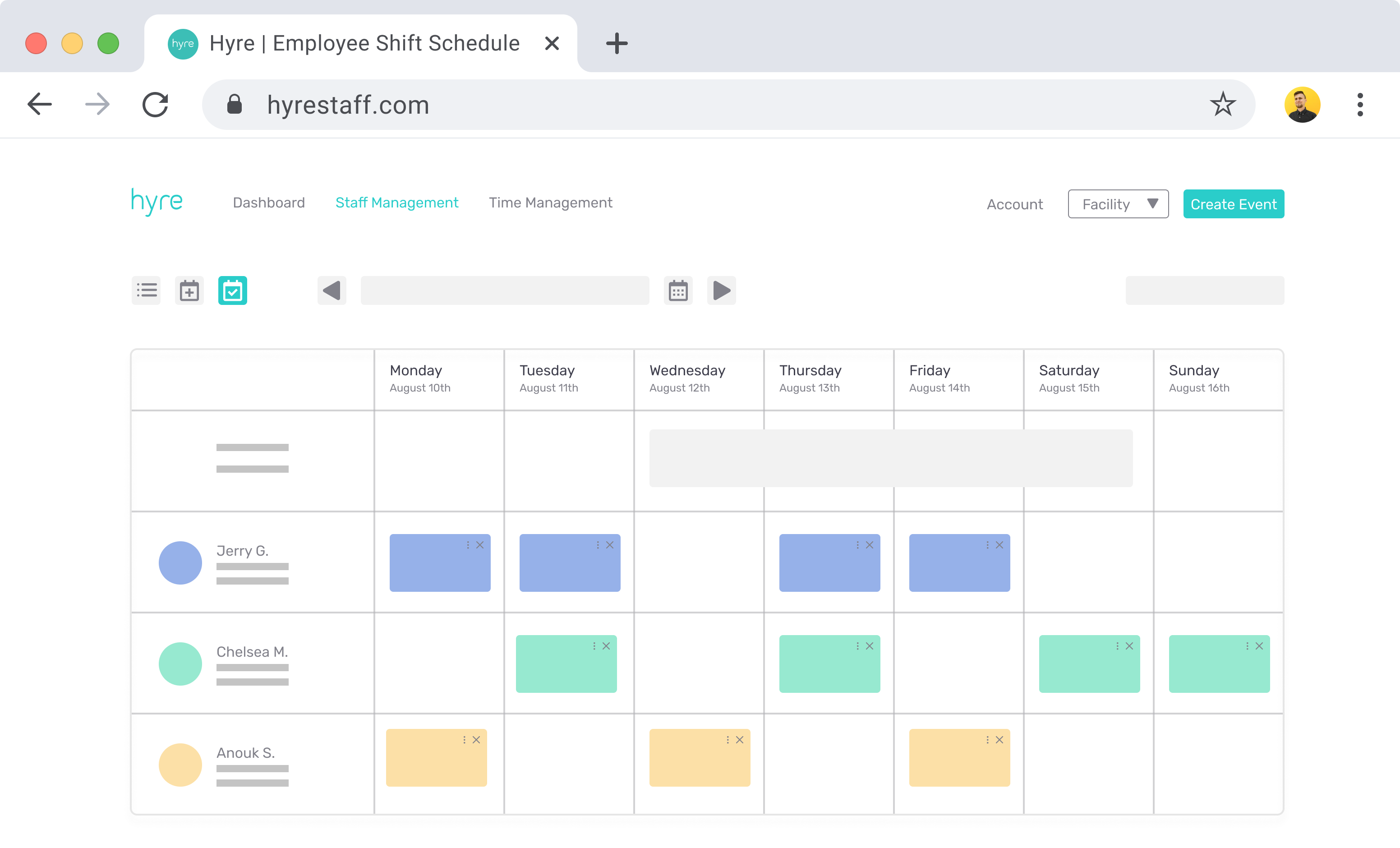